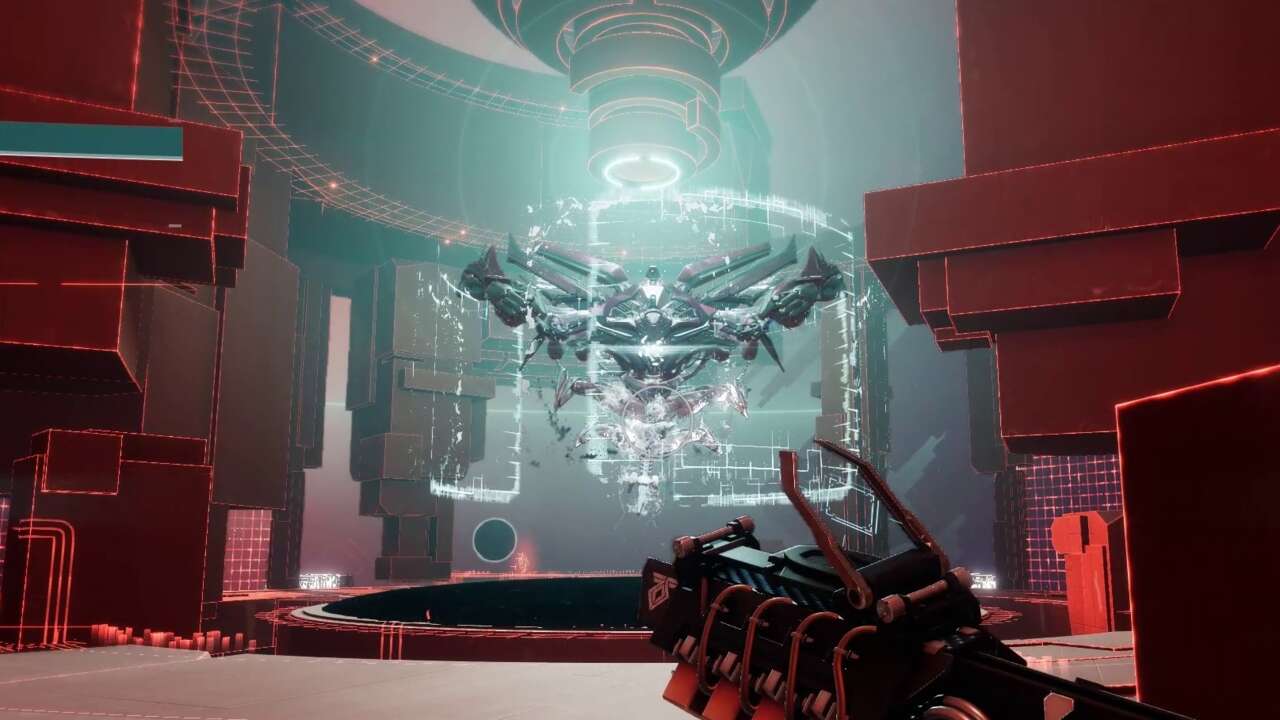 
Destiny 2’s weekly story in the Season of the Splicer has been some of its best ever. A big part of that is the ongoing, unfolding mystery of the actions undertaken by Savathun, the looming Hive god enemy Bungie has been slowly developing since the release of vanilla Destiny 2. Savathun’s whole deal is executing elaborate, spooky plans that are all about deception and obfuscation–tricking you literally makes her stronger. And that makes this week’s new events in Destiny 2 extremely suspect. Warning: We’re about to get into story spoilers for this season.

If you’re not fully caught up, the Season of the Splicer has been marked by the Endless Night, a weird Vex simulation that’s somehow blocked out the sun in the Last City, where all the humans and Guardians live. It might be the slow-burningest threat ever in Destiny; the Endless Night isn’t a bomb or a ship that’s going to crash into the Tower, but instead a miasma that is slowly draining electrical power, encouraging sickness, burdening resources, and damaging morale. The Endless Night has been making people edgy as food becomes increasingly scarce and infrastructure fails. It’s like the City is under siege but without a clear enemy, and that has caused a number of people to turn inward to find someone to blame. There’s distrust in the City’s military leadership, the Vanguard, and there have been attacks against alien refugees, the Eliskni, who have been given shelter within its walls.

Meanwhile, we’ve been attacking the Vex networks out in the solar system to try to disrupt the Endless Night and figure out what its whole deal is. Last week, we discovered the truth that had been suspected since the beginning: the Vex are actually under the control of Quria, a Vex machine that numbers among the Taken. The Taken are enemies that were magically manipulated by Oryx, the Hive god from Destiny 1’s Taken King expansion–Oryx could use his special powers to rob them of their free will and turn them into weird spectral monster things.

Quria is a special Taken. In Destiny 2’s lore, the Vex created Quria way back to study Oryx and figure out his weird “taking” power, since it’s one of those interesting Destiny things that defies the laws of reality (see also: all the players’ Guardian powers that are also known as the Light, and all the Darkness powers–this all falls under the category heading of things that are “Paracausal,” and it’s how Destiny gets away with space magic). Apparently, Quria did figure out how to “take,” despite then being enthralled by Oryx.

This is an ongoing thing in Destiny 2. See, we killed Oryx in The Taken King, so there shouldn’t be any new Taken, since the guy who can do the taking is dead. But new Taken have been popping up all over the place since vanilla Destiny 2. The story and lore has built over time to make it clear that Quria is the new thing doing the taking, using what it learned about Oryx. And we know from the lore that, way back in the past, at some point, Oryx “gifted” Quria to Savathun.

Being Vex but also Taken, Quria has been extremely useful to Savathun. Quria is how Savathun managed to grow the ranks of the Taken and do a whole bunch of things over the course of the last few years, including attacking key locations on Earth and creating the “curse” in the Dreaming City that traps it in a three-week time loop. With the Endless Night, Quria has been doing something similar to the Last City, creating a Vex simulation that mixes with Taken power to wreck everything and sow dissent and distrust–Savathun’s favorite things.

So that brings us up to now. Once we discovered Quria was controlling the Vex and running the Endless Night simulation, we were able to track it down and destroy it this week in a big, intense showdown battle. According to characters in the game and lore entries, the Endless Night is slowly starting to abate. It was tough, but we won, as usual.

Except there’s no way that’s all there is to it. In fact, I’m not convinced what we killed was even Quria.

As mentioned, Savathun’s whole deal is misdirection. Through their weirdo darkness magic, the Hive gain their immense power and even their immortality through a symbiotic relationship with evil worms they keep inside them. They constantly have to feed the worms, or the worms will consume them, so the Hive feeds them with violence (it’s a magic thing, don’t worry about it), and that’s why they’re always conquering. Except Savathun feeds her worm with other people’s “failure to understand me.” She literally needs to deceive people to stay alive and grow more powerful.

So that means we need to think about what Savathun gained from deploying Quria to create the Endless Night and what other angles she might be playing. First, getting Quria killed seems like a major loss. After all, if Quria is the weapon Savathun can use to create new Taken and has power to subvert the Vex’s will to do things like create the Endless Night in the first place, that seems like a helluva useful piece to lose on the game board. Meanwhile, what did Savathun actually get out of this attack? The Endless Night created some cracks in the unified front of humanity, and those cracks might broaden over time–but even if that long-term gain proves useful to Savathun, she still sacrificed a lot for it.

If we accept that Savathun’s plans aren’t what they appear to be, then we have to accept that there’s more going on with the Quria situation. Why would Savathun sacrifice what has to be her most powerful asset, essentially just to mess with us? Even if we assume Savathun was operating on the idea that the Endless Night would somehow be more successful and that we threw a wrench into her plans by allying with Mithrax and the Eliksni to defeat her, it was still an enormous risk to throw Quria out there where we could kill it. So what else is going on?

There are a couple of distinct possibilities, and more if we consider that there are a lot of things we probably don’t know.

First, there’s the ongoing assumption that Savathun has a spy within the City, likely in the leadership, that looks like a human but is actually Savathun herself in some kind of shape-shifted form. The smart money all season has been on this person being Osiris, who has been acting exceedingly weirdly for a long time now. Assume Osiris is really Savathun and most of his dialogue this season has sounded like the real purpose of all these Endless Night shenanigans has been to gain intel on Guardians. If we also buy the premise that Savathun is hoping to somehow trick or employ Guardians to kill her worm and free her from being forced to endlessly feed it—-then the Endless Night as an experiment to study us and our capabilities makes a lot more sense. But it still doesn’t seem like a win that’s worth sacrificing Quria.

Pointedly, though, unlike most Vex Hydras that we kill in Destiny 2, a big chunk of Quria was left behind at the end of the fight during this week’s new mission, Expunge: Delphi. Another fishy thing Osiris previously suggested was the idea of capturing Quria instead of killing it–but after floating that idea a while ago, he never brought it up again, even when we were actively shooting the damn thing. If Osiris is Savathun and Savathun suggested capturing Quria as part of her master plan (or even if Osiris is just Osiris and actually believed in that idea), why not bring it up again and try to stop us from wrecking the valuable Taken Vex? The answers are either that Savathun abandoned that plan because it was too suspicious, or that Savathun was just making that suggestion to sow doubt (which worked)–or, finally, that a surviving chunk of Quria might be enough for Savathun to enact that plan. If the Vanguard nabs that hunk of Quria and drags it back to the City, we could be in very big trouble.

Another possibility is that Quria wasn’t just some tool for Savathun to use but was more like an ally with, potentially, its own agenda. Consider last week’s Expunge mission, when we discovered that Quria was talking with us by leaving messages on our heads-up displays. It was a creepy moment that suggested Quria had more power than we knew, but it also established a Vex machine as being a lot more human than they ever have been before. The alien computer was taunting us. It seemed simultaneously arrogant and angry. These machines aren’t really known for their emotional output, so clearly there was more to Quria than we know.

Add to that the fact that Quria was originally a gift from Oryx. The thing about the Hive is, as much as they work together, they also are constantly fighting one another, and that’s most true of the Hive gods. Oryx, Savathun, and the third Hive god, Xivu Arath, spent eons killing each other whenever they could to increase their own strength. That’s their whole deal–anything that can be killed must be killed, because the Hive’s ethos is to destroy all weakness until only the strongest possible life remains. That’s the Sword Logic, and in the lore, we’ve seen numerous moments where the gods betrayed each other simply as a matter of course. Hell, that’s how Oryx wound up taking Quria to begin with, because Savathun executed a plan to get Oryx’s son, Crota, attacked by the Vex just to screw with him.

So it seems really, really dubious that Oryx gave Quria to Savathun just to be a nice guy. Being nice is against everything the Hive believe. If we assume an ulterior motive with that gift, then it stands to reason that Savathun and Quria might not have been allies at all, or that Quria might not have been fully under Savathun’s control. After all, the Taken King was Oryx.

Maybe assuming Quria was Savathun’s greatest asset is wrongheaded. Maybe Quria had plans of its own, or was as much an enemy to Savathun as an ally. Maybe part of Savathun’s machinations with the Endless Night was to hang Quria out to dry, in hopes that it would get rolled by some Guardians, since that’s exactly what happened.

And finally, there’s that possibility I floated up above, that what we just killed wasn’t Quria at all. We’re dealing with the queen of misdirection here. Quria is an enemy we’ve been hearing rumblings about for years. It would probably be very beneficial for Savathun to make us think we’d destroyed Quria, which might provide some leeway for her to continue with additional Taken plans without us realizing what’s going on. The Dreaming City, after all, remains caught in its Quria-created time loop.

We don’t know how the Vex network actually works, but Osiris’s comment about it being similar to the Hive’s alternate dimension brings up the possibility that maybe killing Quria in that place didn’t fully destroy it–just like killing a Hive in the “real” world doesn’t fully destroy it. After all, you can copy files in a computer, and delete those copies, without harming the originals. That analogy might not be exactly what’s going on here, but the idea of a Vex equivalent of the Ascendant Realm adds some possible complications.

All that to say, of course, that it’s tough to put a finger on what exactly is going on. But if we know anything about Savathun, it’s that the easiest and clearest explanation of events is never the truth. Maybe we did wipe out Quria this week, but it’s probably a mistake to believe we just made Destiny’s biggest threat any weaker. That’s just what Savathun wants us to think.