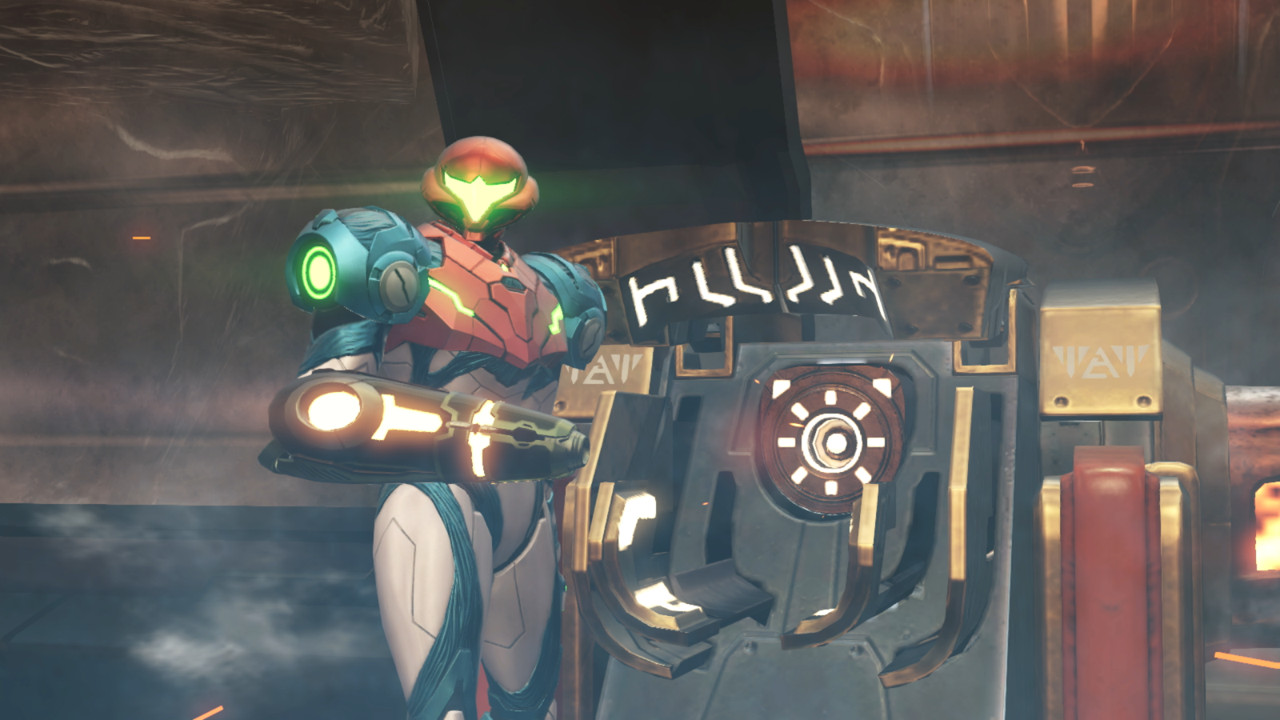 
Metroid Dread doesn’t waste any time in introducing what exactly there is to dread in the long-awaited sequel. Many of the game’s trailers so far have featured the long-limbed, quadripedal robots known as EMMIs, who seem to be near impossible-to-kill sentries that series protagonist Samus Aran must simply avoid. EMMIs–or at least one version of them–are there right from the start of your adventure, and during my recent hands-on playthrough of the game’s opening sector, EMMIs proved to be an effective, compelling way of instilling a healthy amount of panic to the series’ tried-and-true core of action and exploration.

Granted, the last game in this specific Metroid series (Metroid Fusion, which was released a whopping 19 years ago) featured a similar Nemesis-like unstoppable enemy in the SA-X. But while the SA-X was merely a chilling presence in limited (and scripted) spurts, the EMMIs in Dread look like they’ll be a much more present and constant threat. In my hour-long playthrough, the winding path of progress took me through EMMI-patrolled areas several times, which meant repeated cat-and-mouse-like encounters. Although my time with the game was brief, it was enough for me to feel twinges of anxiety every time I saw one of the telltale shimmering black-and-white doors that indicated an EMMI was somewhere on the other side.

But let’s take a step back and frame where Metroid Dread takes place within the wider series. Dread is, officially, the fifth game in what Nintendo terms as the “2D saga,” which started with the original Metroid on Famicom way back in 1986 (or 1987 for NES). The series (which also includes Metroid II, Super Metroid, and Metroid Fusion) charts the story of bounty hunter Samus Aran and her seemingly intertwined fate with a species known as Metroids, as well as her encounters with a parasitic lifeform known simply as X, a whole bunch of Space Pirates, and a mysterious extinct (or are they?) civilization known as the Chozo.

It’s a lot to remember, especially as this particular story has taken 35 years to unfold. It’s no wonder that Metroid Dread makes sure to catch you up on the narrative so far with a brief recap right at the start of the game. The intro gives some necessary background, along with a healthy dose of mystery: The dangerous X parasite, thought to have been wiped out after the events of Metroid Fusion, have been spotted again on Planet ZDR. The Galactic Federation sent a team of the robotic EMMIs to search for the X, but they have been mysteriously corrupted. Now, it’s up to the hyper-capable Samus Aran to figure out exactly what happened to the EMMIs and to confirm if X is again a credible threat. Adding to the mystery is an unidentified Chozo warrior who promptly whoops Samus’ butt the minute she lands on ZDR, stripping away of most of her abilities before abandoning her at the bottom of ZDR’s extensive tunnel system (and yes, that means that in a break from usual Metroid tradition, Samus has to work her way up instead of down during a game).

Despite the forced ability reset, Samus is still a sprightly bounty hunter at the start of Dread, and controlling her as she moves around the opening sector of Actaria is a breeze–her new ability to slide under low obstacles makes early movement especially zippy. This mobility is her key defense against the aforementioned EMMIs. While the first EMMI you’ll encounter is broken (and serves only as a tutorial showing how EMMIs can be destroyed once you get a rare power-up), the second is much more ominous. It’s fully mobile, moves quickly, can scale up walls and ceilings, and is totally impervious to Samus’ weapons.

In Metroid Dread, it seems that EMMIs will be limited to certain areas within each sector. EMMIs patrol their designated zones, sending out sonic pings (visualized by yellow circles on the screen) to detect sound or movement. Once they detect something, they’ll quickly investigate, and if you’re spotted, it’s a relentless chase until they lose sight of you.

During my playthrough, I had to continuously traverse EMMI-patrolled zones as I looked for the way out which, in typical Metroid fashion, involved detailed exploration (and eventually earning new abilities) to find ways to reach what initially seem like inaccessible areas. Going into EMMI areas for me were initially frenetic, bolt-for-the-exit affairs, with any mistimed jumps or missed ledges ending in a quick EMMI-assisted death. But that frantic feeling eventually subsided into a more controlled tension as the game forced more EMMI interactions. In one area, I had to stand on a switch for a certain amount of time in order to access the next room. This simple task was complicated by a pursuing EMMI, which meant I had to get enough distance away from the robot, stand on the switch for as long as I could, before bolting and leading the EMMI away so I could return to the switch again. It was thrilling.

Despite their apparent indestructibility, there are ways to get away from an EMMI, and it’s another area where Dread manages to ably ratchet up the tension. You can, if you’re quick enough, counter an EMMI attack once it has you in its grasp. Much like in Metroid: Samus Returns, most enemies I encountered in Metroid Dread could be countered just before they attacked, but the window for countering EMMIs was especially tiny. Out of perhaps the seven times I was caught during my brief playtime, I only managed to counter once, and even then it seemed more luck than skill on my part. You’ll also be able to completely destroy an EMMI in a sector once you find and defeat that sector’s main control unit and grab a single-use Omega Cannon power-up. When you take on an EMMI with this power-up, your point of view shifts to a close, behind-the-back view of Samus, from which you can aim your fire directly at the robot’s armored head. It takes quite a few shots to first blow away the armor and then deliver the finishing blow, and the act of holding my nerve and shooting as an EMMI slowly advanced towards me was quite a rush.

By the time my hands-on ended, I had encountered a major boss fight and earned new abilities such as one that allowed me to move up certain walls, and another that cloaked Samus for brief periods of time (EMMIs won’t be able to see you if you stand very, very still). But it was those tense EMMI chases that stayed with me well after my time with the game ended. It also made me wonder how the EMMIs will evolve as the game progresses, as previous Dread trailers have shown off different-colored EMMIs, which likely means this game’s most intriguing enemies very likely have more surprises. The Metroid games have always excelled at creating an underlying mood of unease, and in Metroid Dread, it’s clear that unease is meant to boil over into a persistent, constant tension.

Metroid Dread will release for the Nintendo Switch on October 8 2021, which just happens to be the same day the Switch’s slight-revision OLED version becomes available.