Playing three games spanning more than a decade is a strange experience. Playing them all a full 13 years after the last one released makes it a little stranger. It’s also decidedly the way Nintendo likes to do things. They’ve doubled and tripled down on re-releasing their first-party content in recent years. However, even though I hadn’t previously completed any of these games, it felt like there was a missed opportunity in not remaking (or at least solidly remastering) some of them. Yet, even in their original state, the games in Super Mario 3D All-Stars hold up as well as any game could.

The originator of the 3D Mario path is undeniably one of the roughest to play. The visuals are only a small part of the problem though. Despite being hamstrung by very limited draw distance, low resolution all around, pop-in issues, and the general crustiness of a 24-year-old game, it has style. It’s a style that is unmistakable and laid the groundwork for many of the 3D models for iconic characters. I remember at the time it looked great when compared to its chunky contemporaries. The upgrades in resolution provide some relief for a modern audience, but it’s still only a fresh coat of paint to make it acceptable on today’s giant TV screens.

Super Mario 64’s general gameplay experience has not aged quite as well. From the very beginning, the touchy movement of the character leads to issues. Trying to maintain your direction on narrow paths and jumping on platforms that can sometimes almost disappear when viewed at some angles leads to more deaths than it probably should. It feels like you’re fighting the controls just as much as you are the challenges of the game. The worst part of it is the camera controls. It was once bound by the four “C” buttons, which was bad, but even with an analog stick, there isn’t much improvement. The camera getting caught on terrain and being unable to rotate around solid objects meant I had many moments where I was blindly jumping or running into certain death.

As a part of Super Mario 3D All-Stars, Super Mario 64 stands as one of the weakest points. I’m sure there are many fans fueled by nostalgia angry about that already, but it’s true. The other two games from this collection play better and provide a more appealing experience. On its own, this game provides a great challenge and a solidly diverse set of levels. It just needs to be refreshed to feel more like a modern platformer. 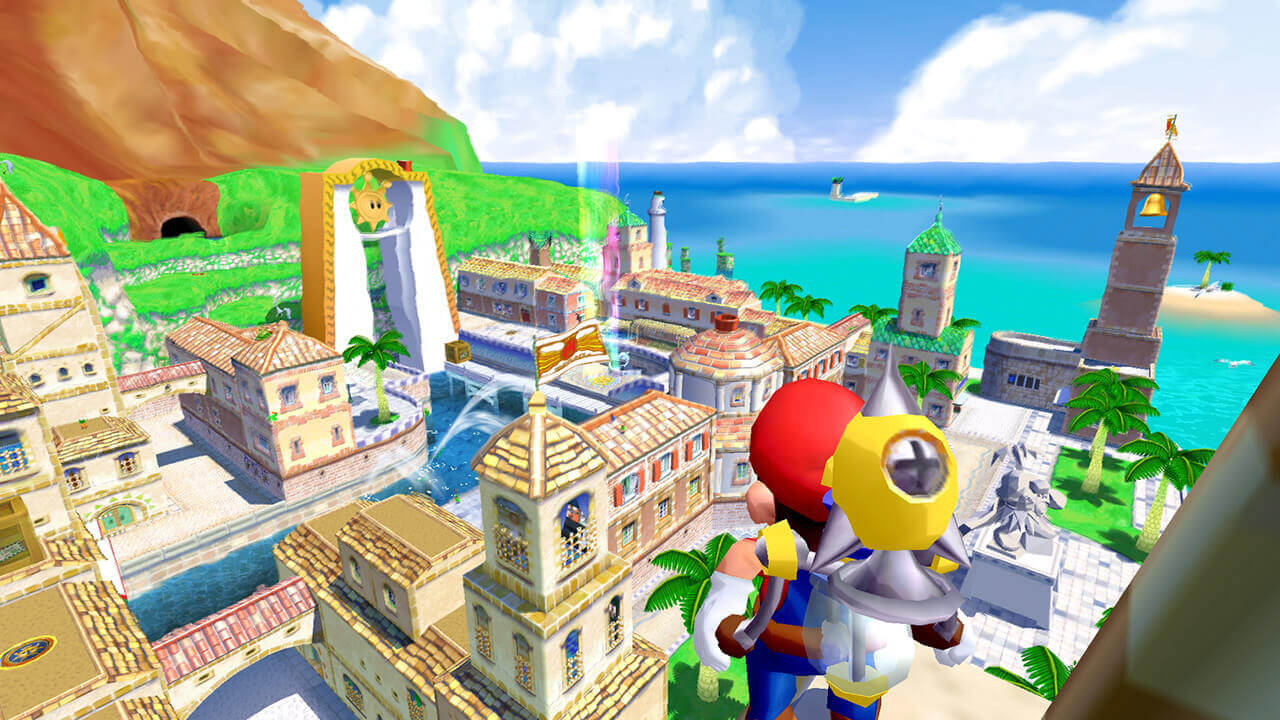 The visual upgrades for Super Mario Sunshine make it feel much more bright and vibrant when compared to the original. That’s very appropriate for a game that takes place on a tropical island. Here, the increase in resolution and widescreen view makes it seem more modern than Mario 64 despite still being 18 years old. If you aren’t thinking about it, there’s little about this game that appears too visually outdated. The upgraded text and screen icons drive home the quality of the new version. Especially with the really solid water visuals. The worst part is the same issue suffered by most remasters of older games – the cutscenes look worse than the gameplay.

The addition of the FLUDD and its mechanics feels a bit out of place at first coming from Mario 64. You don’t necessarily need to be reliant upon it, but I ended up leaning on it without even noticing. You still have most of the jumps and maneuvers from the previous title, but platforming with the hover-jet of your backpack starts feeling like a necessity. Of course, in certain parts of the game, it is necessary though. You’re also presented with other FLUDD attachments that have special mechanics and allow you to access new areas. This makes it an integral part of the game, even with its somewhat awkward integration.

The place where Sunshine falters is with the many difficulty spikes. You’re essentially required to do the first seven levels of every area. No matter how many secondary shine sprites you gain. Progress is tied to chasing down the Shadow Mario antagonist for each one of them. In this way, you’re forced to contend with sections that you may not enjoy in order to progress. These include some of the levels where the Shadow Mario steals your FLUDD and requires you to fall back on your classic Mario skill set alone. Yet, sometimes, the issue is dealing with poorly thought out mechanics like being thrown across a level by NPCs with no prior knowledge of how far you’ll go. Levels like these feel like they’re designed specifically to frustrate and it brings down the whole game just a bit. 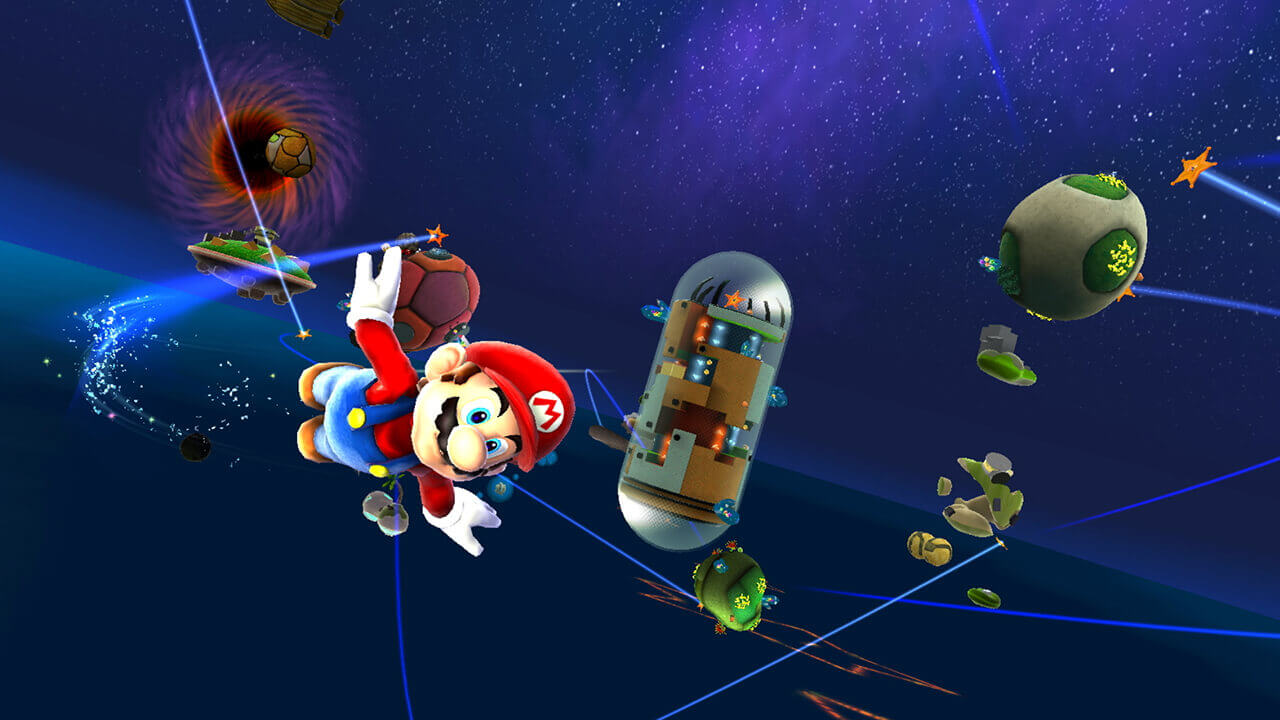 The shining star of the Super Mario 3D All-Stars collection is Super Mario Galaxy. From start to finish, it has almost everything going for it. It’s visually impressive with a huge variety of different biomes represented across the galaxies. More than a decade on, it feels like it could pass as a modern Nintendo release. Even beyond that though, it’s amazing how well this game is put together. As you wrap around the tiny planets and seamlessly transition through the gravity of various platforms, it never stops being stunning. Especially when you get launched between these worlds and the camera spins around capturing all of the grandeur.

What’s most surprising about this port is that it manages to use the Joycons as great proxies for the Wiimote and Nunchuck. Sure, these standard Switch controllers are uncomfortably small and suffer from some of the worst thumbsticks, but it still felt great. It’s impressive how the motion sensor can do a near-perfect adaptation of the Wiimote cursor movement. It can get out of alignment, but tapping of R1 snaps it back to the center of the screen. Since so much of the game relies on using that cursor, it must have been a necessity to make it work so well. I hope with this success, they can port and remake more Wii games.

With the variety in the design of the galaxies of Mario Galaxy, it’s not surprising the gameplay shares that diversity. Whether it’s some of the stage-specific powerups like the Bee outfit or the cool ice skating you can pull off in an ice galaxy, there’s no end to the fun of discovering new gameplay. Occasionally these innovative mechanics were called back later in the game, but never often enough to become boring. Of all three games, Super Mario Galaxy was the only one that made me want to collect more stars than was required to complete the game. 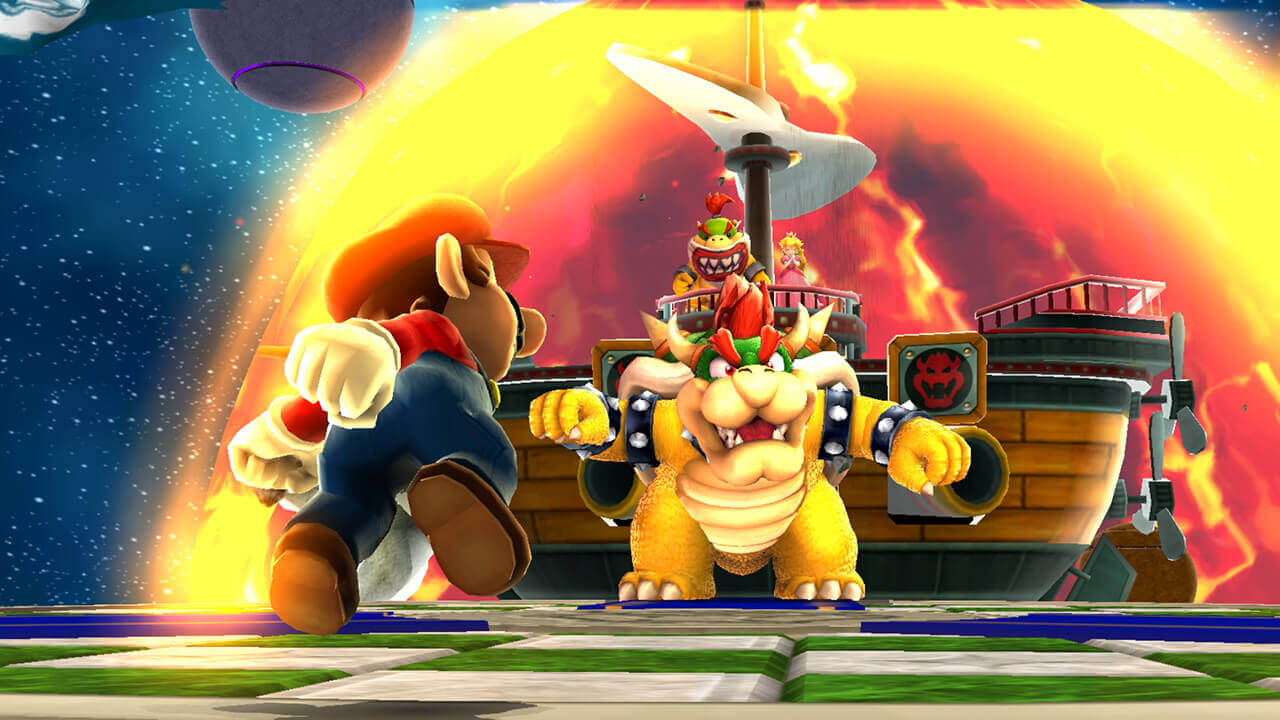 Oddly, this collection didn’t include Super Mario Galaxy 2. It’s easy to see why of the three games included, Super Mario Galaxy was the one to get a sequel. I suppose the issue may have just been the “rule of three,” but leaving it out presents a problem. Would they simply release it on its own? It’s hard to imagine that would go over as well as the three-game release in Super Mario 3D All-Stars. Whatever the case, I think it would be a welcome addition to the Switch collection of re-releases.

While the collection includes these three great games, there’s not much additional content in this package. It does include the soundtracks for each game, but that doesn’t seem very useful. In a world where music is streamed everywhere, why would you want to have that tied to your Nintendo Switch? Nonetheless, it’s nice to be able to see all of the soundtracks in their entirety.

Super Mario 3D All-Stars is a solid deal for people who don’t own or haven’t played these three games. It’s a little harder to justify owning if you do. However, each game brings something of value to the table. Noone will deny that it’s worth playing all these even while they do overlap in their 3D platforming nature. Getting a chance to play what is essentially the best current versions of these games made it worth the cost. The fun I had with them was even enhanced by being able to directly compare them and see the improvements being made over time. The Mario franchise may be at its best in Odyssey, but every game in this collection is a stepping stone to that greatness (and Galaxy might even be better in some ways).

If you’d like to see reviews of more Mario games, check out Super Mario Bros. 35 and Paper Mario: The Origami King!