From developer Edelweiss and publisher XSEED Games comes Sakuna: Of Rice and Ruin, the new action platformer/farming simulator. The game has an interesting plot and takes a unique approach to its gameplay, yet it struggles to be consistently entertaining towards the end.

Sakuna: Of Rice and Ruin follows Sakuna, a Japanese goddess of agriculture who one day, unintentionally lets a makeshift family of starving humans invade the realm of gods. This consequently ruins the offering of rice meant for a ceremony. As punishment, Sakuna is sent to an island with humans as it becomes host to a demon invasion. She also must vanquish said demons while simultaneously growing new rice as a replacement. Sakuna being the bratty goddess that she is, doesn’t take this too lightly yet has no other option but to get down and dirty by exploring and fighting the demons inhabiting the island. All this while also growing rice to prevent herself and the humans in her care from starving.

As the game starts and players get acquainted with the characters and the plot, they will then be thrust into action. Your first task, of course, is to explore your new island home. At this point, the game turns into a 2.5D action-platformer where you fight several enemies in your way. You’ll also pick up items and materials in different sections of the map along your journey.

Your progress on the island is metered by how much you’ve explored. This is denoted by a checklist of tasks, requiring a certain amount of progress to unlock more areas. When in combat, Sakuna uses three tools at her disposal. The sickle provides short and quick attacks while the long hammer delivers heavy attacks. Finally, there’s her divine raiment, letting her grab and stick to objects and walls for combat or light platforming.

As mentioned earlier, the island consists of a variety of both crafting materials and food items. You can take these items back to the homestead to make use of them in various ways. One such way is bringing back the items to the many humans in her care. Most of the humans play certain roles in the community, such as a blacksmith, an assistant farmer, and a cook. These particular citizens will offer their services to Sakuna during her sentence, making her time on the island a bit easier. Getting to the game’s main event, rice farming, the game surprisingly implements a system that’s both highly realistic and interesting.

To begin the rice growing process, players will first plant the seedlings at a reasonable distance from each other. They will then have to fill the patty with the appropriate amount of water. Finally, you’ll wait for the rice to grow while watching out for weeds in the process. Once it’s time to harvest, Sakuna must then wait for the rice to dry, and then use the appropriate tools to thresh and mead the rice. 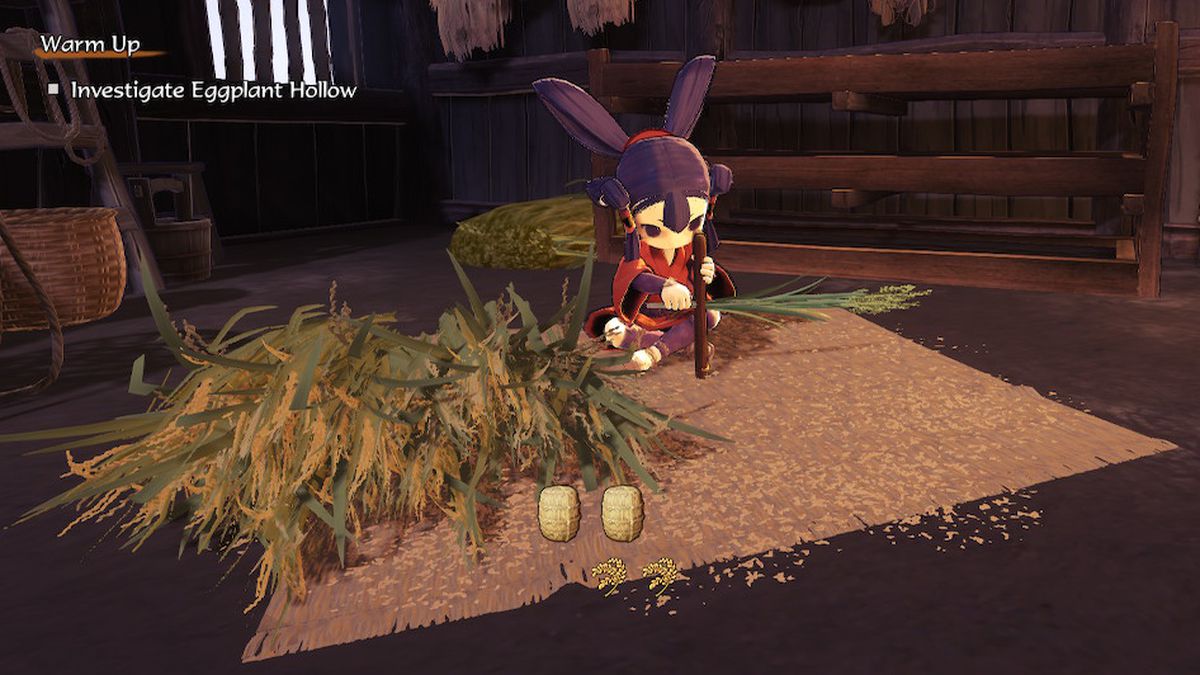 After finally receiving the result of their hard-earned work, players must then prepare for the next round. This includes tasks like clearing out rocks, prepping the soil, and applying fertilizer while taking account of the passing seasons. The beauty of Sakuna’s farming system is that all the steps are done manually. Because of this, it really does a great job of immersing you in the process in an almost relaxing manner.

Of course, it doesn’t always have to be manual, as Sakuna can leave parts of the process to other homestead members. However, I personally felt more comfortable doing it all on my own. As Sakuna is a harvest goddess, she gains abilities from the rice she produces. The quality and type of rice she produces also play a factor in the type of abilities she gains. So if you do a terrible job at caring for and harvesting your rice, it will reflect on the abilities you gain or lack thereof, and vice versa.

A Few Weeds in the Crop

Another part of the game I really enjoyed is its unique aesthetic and stylistic character designs. Sakuna: Of Rice and Ruin also accurately takes influence from the feudal Japanese era. This especially shines through in its music and the character’s dialect.

Unfortunately, despite its excellent executions, Sakuna: Of Rice and Ruin is not without its drawbacks. A part of the game that really rubbed me the wrong way is its grindy elements. The game forces players to replay several parts of the map to find a specific item or extract a material a certain number of times. The fact that this is a necessary part of the game to progress the story can often be vexing. Aside from that, the combat is quite simplistic. After a few hours of unlocking and performing the same moves and fighting the same enemy types, things will start to slow down and even grow dull. Despite the few issues, I enjoyed my time with Sakuna: Of Rice and Ruin. The in-depth farming system was relaxing and almost therapeutic, which really goes in its favor. The game also takes quite some time to finish. Those looking to pick this one up should get a fair bit of content for their money.

Have you played Sakuna: Of Rice and Ruin? What do you think of this review? Let us know your thoughts in the comments section below.

Sakuna: Of Rice and Ruin