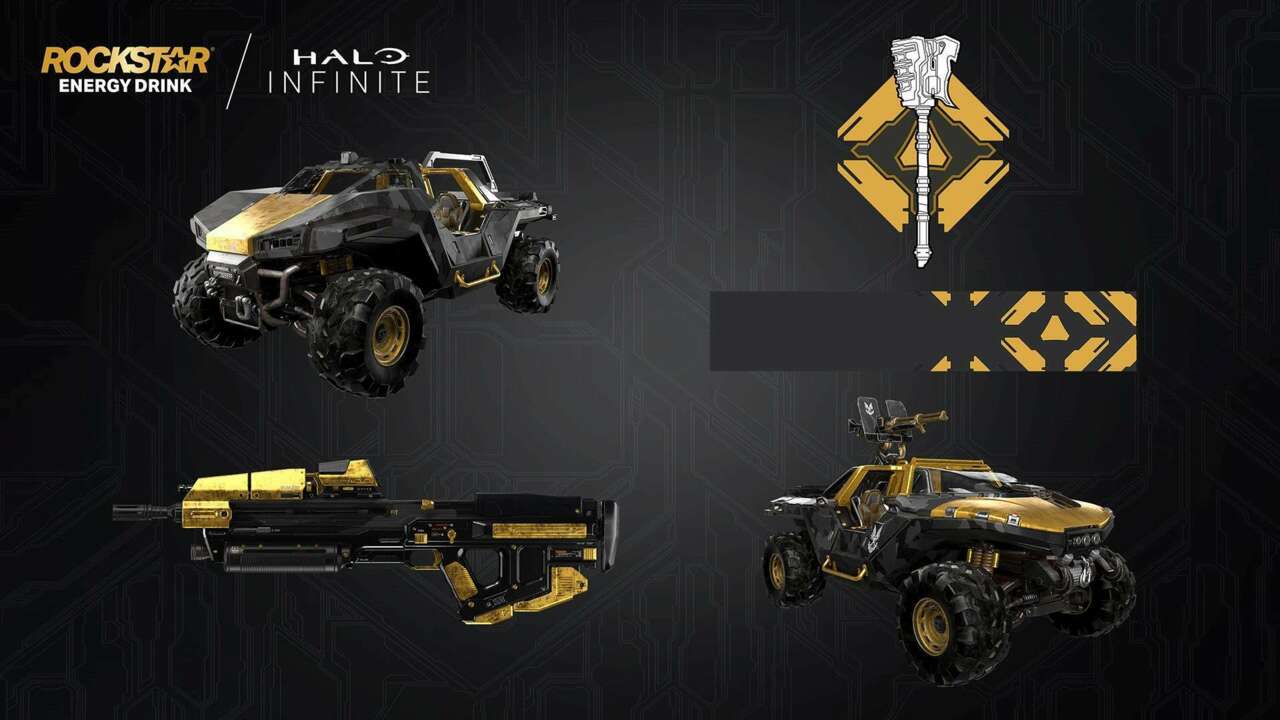 
After teasing it weeks ago, Microsoft has now officially announced its partnership with Rockstar Energy for special cans of the energy drink that come with in-game DLC and double XP for Halo Infinite.

The cans are now available in the US and Canada, and they come in original, sugar-free, fruit punch, silver ice, and blackberry goji flavors.

The promotion runs through December 31. In that time, everyone who buys a specially marked can will find a code under the tab that unlocks double XP and Challenge Swaps (which are part of Halo Infinite’s new challenge-based XP progression system). Some codes unlock an emblem inspired by the Banished version of the Gravity Hammer. Other codes come with the “Nocturne Star” collection that includes skins for the MA40 weapon and the Warthog and Razorback vehicles. You can see this DLC below. This DLC is presumably exclusive to this Rockstar promotion.

There is a grand prize, too, in the form of a specially made Jeep Gladiator made in partnership by Rockstar and Microsoft. “Inspired by the power of Master Chief, the custom vehicle will feature Master Chief-colored protective coating, massive 43″ extreme traction tires, stylized body armor, performance upgrades and pro-level suspension ready for any level of terrain from rock crawling to cruising the pavement,” Microsoft said. No image of the Jeep was released as part of the announcement.

Microsoft and Rockstar worked with five artists to come up with the designs for the special Rockstar Energy drink cans. Each artist came up with their own take on a Spartan’s “bravery and strength.” You can read the artists’ bios on Microsoft’s website.

Microsoft previously partnered with Rockstar for a Gears 5 promotion featuring special cans and in-game DLC, among other extras.

Back in 2020, Microsoft teamed up with Monster for Halo Infinite-branded energy drinks that offer double XP for the game. After Halo Infinite was delayed to 2021, Microsoft assured fans that any cans they bought at the time would be honored with double XP when the game launches.

The Monster and Rockstar promotions are just two of Microsoft’s many co-marketing deals with food and drink companies to promote Halo Infinite. Microsoft also worked with the makers of Butterfinger and other sugary snacks on various promotions, while the company created Halo Pringles that were meant to taste like the Moa bird.

Halo Infinite is scheduled for release on December 8 across Xbox One, Xbox Series X|S, and PC. The game’s latest multiplayer beta, which featured Big Team Battle, has now concluded. While Microsoft has been very forthcoming with details on multiplayer–which is a free-to-play standalone offering–fans are still waiting to see and learn more about the campaign. Here’s to hoping that happens soon.